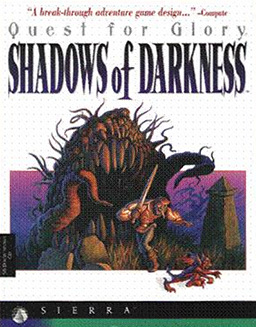 Oi, Hero. Behind you.
Quest for Glory: Shadows Of Darkness is the fourth game in the Quest for Glory series. Literally moments after his victory in the third game, the hero was teleported away by dark magic. He awakens in a very large, and very strange cave, whose caverns seem to resemble organs or bones, and is littered with skeletons and much worse things. The hero finds his way out of the cave and stumbles upon Katrina, a young woman who is surprised that anything made it out of the cave in one piece. She points him toward the local town where there the hero gradually learns more about the land he has found himself in.
Advertisement:

The land is called Mordavia, (this time the setting is inspired by Eastern European and Russian folk myths and Gothic imagery) and it was scarred by an old conflict long ago between good and evil. Once a group of deranged cultists who worshiped an Eldritch Abomination called The Dark One attempted to summon it from its natural dimension and into the world. A group led by the paladin Pioytr and the famous sorceress Erana fought against them, and managed to interrupt the ritual. Erana disappeared in the fight, and most but not all of the cult was killed. Shortly afterward, Piotyr also vanished, which caused many to think he had abandoned the land and his responsibilities.

Because The Dark One had already been partially summoned, interrupting the ceremony did not get rid of it entirely. Instead it has been lying dormant in the form of the cave the hero appeared in, and its partial presence in the world has been warping the land, turning it into a center of dark magic and evil creatures. Monsters of various kinds haunt the forests and lakes of Mordavia, and swamps filled with The Undead have overgrown the only road out of the valley, effectively cutting off Mordavia from the rest of the world. Although the land and its people have limped on since the battle against the cultists, the people have shut themselves in the town, only daring to leave it in order to work their fields.

But suddenly the castle of Mordavia's former ruling family is inhabited again, and unknown to all a new evil force has made its way into the valley to finish the ritual that would unleash The Dark One. The hero will need to use all his might and wits to heal the wounds of the land and discover who brought him to Mordavia, why, and how to save the land and its people. Old foes and new challenges will both be found, and the hero will face his greatest challenge yet...

This was the first game of the series with voice acting (including narration by John Rhys-Davies and Jennifer Hale in her first Video Game role as Katrina). The game is often regarded as the best of the series, combining a gripping plot with colorful characters and a pleasant atmosphere. It's also known for being the buggiest. Also a first in the series is an optional strategy mode which let the computer fight for you with predictable results. You can control the level of aggressiveness, defensiveness, magic use and special attack you want.