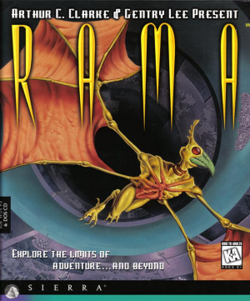 Explore the limits of Adventure ... And Beyond
Besides being the "father" of satellite communications, Arthur C. Clarke has the particularity of being one of the most popular science-fiction writers of the 20th century. His novel 2001: A Space Odyssey brought to Hollywood by director Stanley Kubrick in 1968, encountered tremendous success from the public, which, with the long series of science-fiction books he published later, raised the reputation of Clarke to a worldwide awareness. Developed by Dynamix and published by Sierra and inspired by the series of the same name, Rama is the first game based on Clarke's work. The series started with Rendezvous with Rama and today contains three additional titles co-written in a period of ten years by Gentry Lee, Clarke's friend and an ex-NASA engineer. Lee is the person responsible for the idea to create a game that would propel players into the mystical universe of Rama. With the help and contribution of Clarke himself, the Rama project became a reality and is now available as an adventure game that is truly captivating.
Advertisement:

Rama is the name given to a huge cylindrical space ship that one day entered into our solar system. Even though the time is 200 hundred years in the future ahead of our time, there have been no contacts with extraterrestrial life yet. For many, Rama represented the only hope to establish contact with another intelligent life form. For this purpose, a multi-disciplinary team was organized and intensely trained to be ready for the exploration of the city-size vessel. Still, when the date of the departure arrived, none of the team's members were prepared for the amazing encounters they would make in Rama, nor the fascinating world they would explore. The International Space Agency (ISA) did not plan for you to become a part of the mission, but the brutal and mysterious death of the mission commander Valeriy Borzov made it necessary for you to be sent as a replacement astronaut to join the crew on Rama. When looking through the window of your ship as it was approaching the enormous black structure of Rama, you wondered what would await you in Rama. Somehow, you hoped you would find an answer to the essential questions you kept asking yourself. Why was it sent, and by who?