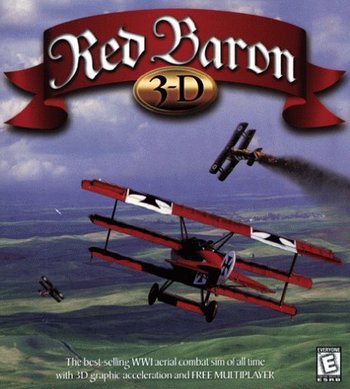 Red Baron is a series of renowned combat flight simulators created by Dynamix (also known for Starsiege: Tribes) and originally published by Sierra Entertainment. The games in the series are:

In each game, the player gets the opportunity to fly and fight against a broad selection of aircraft in the skies above the trenches of World War I's Western Front. The player can choose to fly for either the Allies or the Central Powers (the original featured only the Royal Flying Corps and the German Fliegertruppen / Luftstreitkräfte, though the former also flew a lot of French designs; II/3-D added the French Aéronautique Militaire and the United States Army Air Service to the Allied side) in a variety of missions, including squadron dogfights, balloon busting or defense, and patrolling and escort missions. You can even choose to test your mettle against some of the air war's most famous aces in one-on-one dogfights.

There are two primary gameplay modes: Single Mission and Campaign. The former is pretty much self-explanatory; you fly a single mission with a predetermined objective according to your own personal settings, or a "historical mission" that tries to model the conditions of a certain ace's more notable accomplishments. In the latter, you enlist in one of the aforementioned services anywhere between late 1915 and late 1918 and fly missions with your assigned squadron. A successful career brings with it awards, promotions, and the chance to customize your aircraft; less-than-adequate performance usually leaves you dead at the hands of your hated foe.

Given the fact that the game is set during World War One, a lot of "staple mechanics" of the combat flight sim are left out in favor of increased historical accuracy. Gone are minimaps, sensors, and autotarget features; instead, you have to rely on your wits, your knowledge of the local terrain, and the maneuverability of your craft to navigate and fight.

. 3-D is now being published commercially by Mad Otter Games, who are working on yet another Updated Re-release for more modern computers; more information on how to acquire a copy can be found on the official site

, or with the film The Red Baron.