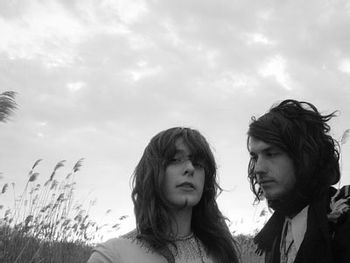 "It will take a while
To make you smile
Somewhere in these eyes
I'm on your side"
—Space Song
Advertisement:

Beach House are a dream/indie pop duo from Baltimore, Maryland. They were formed in 2004 and consist of guitarist Alex Scally and vocalist/organist Victoria Legrand. They are known for their lush music and signature sound. Unlike most dream pop bands, they aim for a certain "theme" with their music (the duo's name should make it clear). They're also known for taking simple melodies and making them sound intense.

Their Self-Titled Album released in 2006 is usually swept under the table and forgotten about, due to its lack of real intense sound. Fans usually acknowledge its existence but try to ignore it, seeing as their work just got better. In 2008, they released Devotion, where they started to pick up their Signature Style and critical acclaim. Then, in 2010, Teen Dream was released and was again critically acclaimed.

In 2012, they released Bloom. While it isn't a cult classic like Teen Dream, it was by far their strongest-selling album, rising up to No. 4 on the Billboard Albums chart. Year-end reviews were positive, with many listing Bloom in the top 20.

Their fifth album Depression Cherry was released in August 2015. Citing a dissatisfaction with the sound of live drums, the band wanted a return to the sound of earlier albums, citing a focus on melodies and minimalism compared to Teen Dream and Bloom.

Also, it should be noted that this band shouldn't be judged on first glance. Their music is notoriously hard to get used to, but once that's accomplished, it's highly worth it.