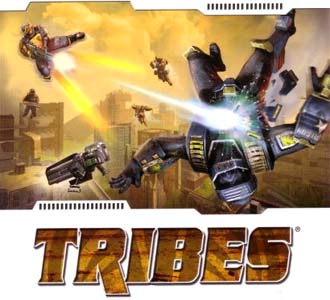 Tribes is a long-running series of multiplayer-focused First Person Shooters found mostly on PC, with a few exceptions. The original game bears the Starsiege title because it is in fact a sequel of sorts to that game and represents the continuation of the EarthSiege franchise as a whole.

In the distant future, humanity has spread amongst the stars. Beyond the edge of space controlled by The Empire, in a region called the Wilderzone, are various tightly-knit Tribes, who live a harsh frontier existence but otherwise free of Imperial authority. The disparate tribes battle one other for control of planetary territory and resources using Powered Armor and advanced small arms.

, a Spiritual Successor to Tribes 1. Some former members of Dynamix are also helping create Fire Fall, a MMOFPS which bears many similarities to the Tribes series, such as the extensive use of jetpacks. Midair

is an upcoming "I can't believe it's not Tribes®!" shooter that was successfully crowdfunded.