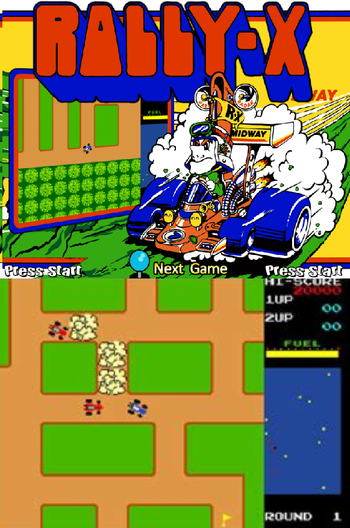 If Pac-Man were a car, this is how he would live.
Advertisement:

Rally-X was a 1980 arcade game by Namco focusing upon a lone race car and its quest to locate and collect the multitude of flags hidden throughout mazes. Its task was hindered by murderous red race cars whose sole objective was to locate you and kamikaze into your car. Your only defenses against them were your impeccable driving skills and a smoke screen. The smoke screen would disorient the enemy cars for a few seconds while you tried to escape and locate the rest of the flags within the round.

The quest was also hindered by obstacles in the road — the occasional rockslide, for instance.

The maze changes from level to level. And you cannot see it all at once. There is a radar map to show you where all the flags and the enemy cars are, but it does not show you the walls — and you do need to know where they are!

The game also marked the debut of the iconic Special Flag, which popped up in several later Namco games as collectible item and Easter Egg.