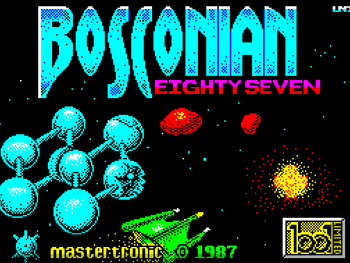 Bosconian is a multi-directional Shmup developed by Namco in 1981 and released overseas by Midway later the same year.

As was common back in the day, gameplay was fairly simple: The player took control of his rocket and blasted off to destroy menacing green space stations, asteroid swarms and frighteningly competent enemy ships. More than a mere Galaxian knock-off, Bosconian was unique in that it gave the player not only total directional control over his spaceship, but also the ability to fire additional shots from the aft of the ship.

While never quite so popular as Space Invaders or Namco's own Galaga, Bosconian nevertheless enjoys a strong following and is available on multiple iterations of Namco Museum, Plug N' Play TV games, and other retrogaming collections. Famicom space sim Star Luster has some connections to Bosconian, and Japanese arcades also saw a Vertical Scrolling Shooter sequel/spin-off called Blast Off.