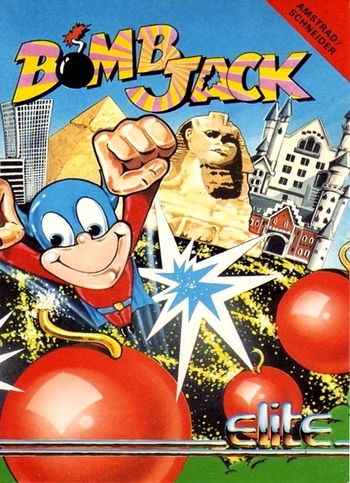 Bomb Jack is a single screen Platform Game by Tecmo starring a caped superhero who travels around the world collecting bombs. It was originally released as an Arcade Game in 1984, when Tecmo was still known as Tehkan, and was ported to the SG-1000, Game Boy and various computers.

Tecmo's first game developed for consoles was Mighty Bomb Jack for the NES (and Nintendo Vs. System), which drastically expanded on the original gameplay, and gave Jack new Mighty Powers to help him explore horizontal scrolling and vertical scrolling levels set inside a pyramid.

Elite Systems Ltd, who brought Bomb Jack and later Mighty Bomb Jack to Western computers, also produced a sequel of their own, Bomb Jack II, for the Commodore64, Amstrad CPC, and ZX Spectrum. This retained the single screen layout of the original game, but drastically altered the jumping mechanics.