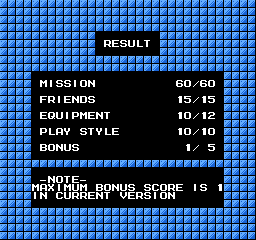 This is a perfect score, by the way.note And then 0.02 came around...
"YES! You win!
NO! We don't have anything awesome to give you.
BUT... maybe we could assign you some random title."
— This Is the Only Level 3 (which proceeds to do so)
Advertisement:

Sometimes, just beating a game isn't enough. Some of the more obsessive gamers want to know how they did. If only there was some sort of ranking system...

In comes the End-Game Results Screen, which is exactly that — a screen at the end of a game that informs you of how you did. Usually, it'll give you a letter grade or nickname or number total or something of that sort, but other times it'll just show you your stats.

Oftentimes, it just gives you your total time, which is nifty for speedrunners.

NOTE: This is not a Gameplay Grading screen after the final boss. This is a special screen around or after the end of the game calculating your total rank.