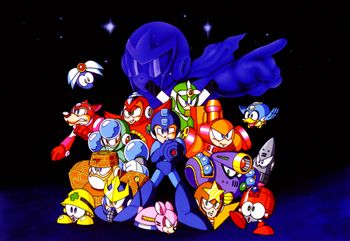 "In the year 20XX AD, A vicious army of robots is bent on destroying the world!! And behind the destruction is...Proto Man?!"
—The intro to the game

Game No. 5 in the Mega Man (Classic) series for the NES. It was released in Japan in December 4th, 1992, closely followed by a North American release on December 15th, 1992. It has since seen numerous re-releases, including the Rockman Complete Works, Mega Man Anniversary Collection, Virtual Console, PSN, and the first Mega Man Legacy Collection. This game introduces Beat, a robot bird sidekick for the Blue Bomber.

Two months after Mega Man's last battle with Dr. Wily, several robots under Proto Man's command suddenly attack the city, while Proto Man himself abducts Dr. Light, leaving behind his signature yellow scarf. Dr. Cossack helps Mega Man in Light's absence by increasing the power of the Mega Buster to stop the robots, and creates the robotic bird Beat to assist him.