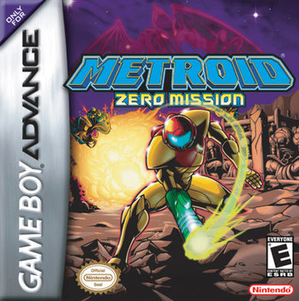 Planet Zebes... I called this place home once, in peaceful times, long before evil haunted the caverns below. Now, I shall finally tell the tale of my first battle here... My so-called Zero Mission.
—Samus Aran
Advertisement:

Metroid: Zero Mission is a remake of the original Metroid, released for the Game Boy Advance in 2004, and the sixth game released in the Metroid series.

The plot is essentially the same as the original game: the Space Pirates have come into possession of a dangerous organism called a "Metroid", which they are cloning to create an army. Samus Aran must infiltrate their base on Zebes to destroy both the Metroids and the base's Artificial Intelligence Mother Brain. However, the story has been expanded, with extra bits touching on Samus being raised on Zebes by the Chozo and Ridley's belated arrival on Zebes. The gameplay builds on the control set-up refined in Super Metroid and Metroid Fusion while including new power-ups, areas, and enemies not present in the original NES version. There is also an Unexpected Gameplay Change near the end, and beating the game unlocks the original NES game.

Thirteen years later, the sequel to the original, Metroid II: Return of Samus also got a remake in a similar vein for the 3DS, titled Metroid: Samus Returns.