Go for the Eye 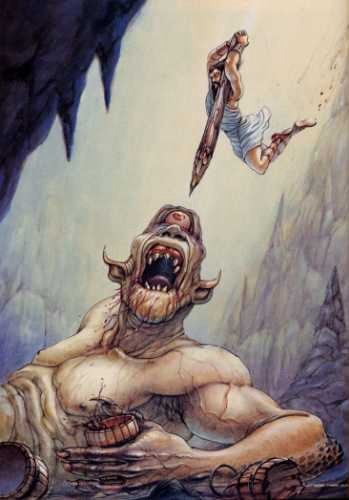 It's bad when you get blinded by a nobody.
"The eyes are the groin of the head."
— Dwight K. Schrute, The Office (US)
Advertisement:

No matter how thick the hide, hard the chitin, or magically impervious the body, the eyes are a natural weak spot for any creature that has them.

If you ever encounter a monster in a video game with a single, enormous, glowing eye, you can bet dollars to donuts that said eye will be that monster's only weak spot. The rest of its body will be Made of Iron, and even the Infinity +1 Sword won't damage it. Often, part of the strategy to beat the boss will be figuring out how to make it open its eye or to get the eye low enough so you can hit it for massive damage.

Compare Eye Scream (which this trope encourages to defeat a boss) and A Handful for an Eye. For more human characters getting their eyes whacked, see Moe Greene Special.

Although it might sound like it, Eyes Are Unbreakable is not an inversion of this trope. Also, do not confuse with Finger Poke of Doom.

The Gooper Blooper is invincible until the Olly seal on its eye is hit.

Alternative Title(s): Aim For The Eye

The Gooper Blooper is invincible until the Olly seal on its eye is hit.