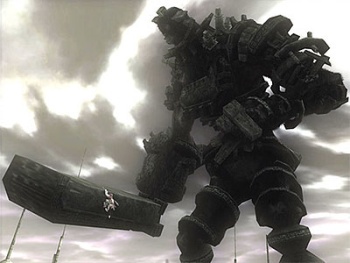 See that tiny white thing hanging off its sword? That's you.
"Some mountains are scaled. Others are slain."
— Tagline for Shadow of the Colossus
Advertisement:

A specific exchange between two characters of different size scales, and a way for the little guy to get a leg up.

The smaller character attacks the bigger character by climbing their body, avoiding their ponderous opponent long enough to attack a vulnerable spot. Can involve climbing on fur, hair and clothing, or can alternately involve invasion under clothing. The climb may be made easier when combined with a Gulliver Tie-Down. If the attacker is swallowed, this can quickly lead to a "Fantastic Voyage" Plot.

Generally, this occurs between a normal-sized person and a giant monster, or a tiny-sized character and a normal-sized opposite. It is a feature in many Incredible Shrinking Man and Attack of the 50-Foot Whatever plots, and is a common tactic of rodent or insectoid animal characters, (talking or speech-impaired). Can also happen if the smaller person had no idea they were on the larger one in the first place.

A milder form has a small child trying to bring down an exceptionally big thug, but it almost never works.

Since most western animation is designed as kid-friendly stuff, this will most often not be done to a female character, and the vulnerable area attacked will not be the most vulnerable area. Though on the occasions where it is done on a woman, it is often a source of Fanservice.

Although it goes back to epics like Inferno, this has also become a common game trope, especially during Boss Battles. It treats the boss monster as an element of the environment, and designates parts of his body as platforms, to give a clear shot at his Achilles' Heel. Doing this to a Humongous Mecha often involves important wires.

See also Stepping Stones in the Sky and Monstrous Scenery. When it happens in a shooter, it's a Battleship Raid. Compare Level in Boss Clothing.

While attempting to calm Hector's rage, Gumball has no choice but to take a leap onto his colossal backside.

While attempting to calm Hector's rage, Gumball has no choice but to take a leap onto his colossal backside.