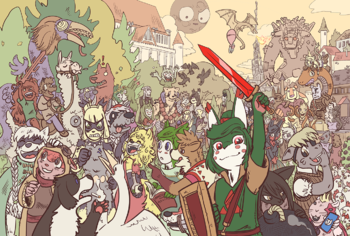 Willa Dragonfly is too young to save the kingdom from monsters and evil-doers...
But she does it anyways!
Advertisement:

Written and drawn by Nick Daniel and set in the fantasy world of his previous comic 70-Seas, Latchkey Kingdom

stars Willa Dragonfly, a young adventurer-for-fun-and-profit who pays for groceries by Dungeon Crawling. It takes place in the Kingdom of Hilla, whose countless dungeons hold countless treasures that attract adventurers from all across the world.

The comic starts off as a parody of The Legend of Zelda and other fantasy videogames, but it soon changes focus from single-chapter game parodies to ongoing character-driven stories with an ever-expanding cast.