Literature / The Amazing Maurice and His Educated Rodents 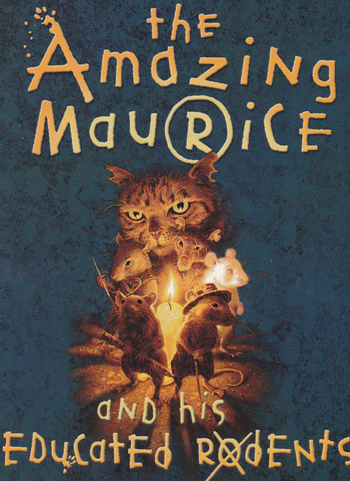 "But there was more to it than that. As the Amazing Maurice said, it was just a story about people and rats. And the difficult part of it was deciding who the people were, and who were the rats."
Advertisement:

The 28th Discworld book, and the first one specifically aimed at teen readers.

Maurice, a streetwise tomcat, has the perfect money-making scam. He's found a stupid-looking kid who plays a pipe, and he has his very own plague of rats — rats who are strangely educated, so Maurice can no longer think of them as "lunch". And everyone knows the stories about rats and pipers. When they reach the stricken town of Bad Blintz, the little con suddenly goes down the drain. For someone there is playing a different tune. A dark, shadowy tune. Something very, very bad is waiting in the cellars. The educated rats must learn a new word. Evil.

It's not a game any more. It's a rat-eat-rat world down there, and that might only be the start.

The Amazing Maurice and His Educated Rodents won the Carnegie medal for best children's book published in the UK in 2001, making it Pratchett's first book to win a major award.

The story was adapted into a ninety-minute radio drama in 2003, starring Harry Meyers as Maurice and David Tennant as Dangerous Beans. It simplified the story a little, but largely kept to the tone and feel of the book. In 2019 it was announced

that an animated film is in the works, with a script by Terry Rossio (Pirates of the Caribbean, Shrek) and character design by Carter Goodrich (Ratatouille, Brave). In 2020, it was announced that

Hugh Laurie would be playing the role of Maurice.

Spider: What are you? Your mind is WRONG.
Maurice: I prefer 'amazing'.