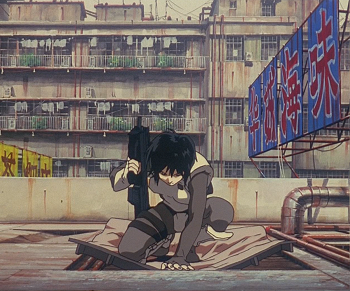 The roof's weatherproof, but not Major-proof.
Advertisement:

What goes up must always come down. In this case, it comes down hard.

This trope illustrates characters who can land with such an impact that it can break the ground beneath them. Remember though, to have enough force to break the ground, (often a concrete sidewalk or asphalt street) you also would have enough force to break your legs, or if you are falling from high enough, every bone in your body. Though given the mass of the human body, even that isn't likely to be enough to break solid concrete. However, those who make a dramatic entrance this way are rarely human anyway, whether literally or just power-wise; if it's not classic Super Toughness, the character might be using some sort of Applied Phlebotinum (Functional Magic, Deflector Shields, Nano Machines, etc.) to reinforce their body, nullify the force of the impact upon said body, or some other relevant effect.

Can be combined with Three-Point Landing for extra badass points.

See In a Single Bound, whose users this would probably apply to. Also see Ground Pound for examples of more hard landings or Goomba Stomp when the "ground" in question is an enemy.

Note, if it causes a ripple effect spanning out from the impact point, it's a Ground Wave.

Thor doing a ground shattering land when he confronts Malekith about trying to destroy Earth.

Thor doing a ground shattering land when he confronts Malekith about trying to destroy Earth.