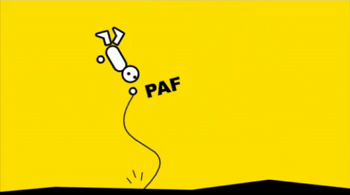 Yahtzee shows us why Just Cause 2 makes Newton spin in his grave.
"He doesn't even need [parachutes] to break his fall, because he can hookshot onto the ground and escape unharmed. That's right! The best way to survive smacking into concrete at terminal velocity is to smack into it slightly faster. Maybe it's a homeopathic thing."
— Yahtzee on Just Cause 2 in Zero Punctuation
Advertisement:

Oh no! You're falling from a huge height. Maybe your helicopter got shot down. Maybe you misjudged a jump. Or maybe you got knocked into the air by a huge enemy. The point is: You're going to pancake when you hit the ground and there's none of that oh-so-handy water anywhere! You don't have magic slowfall powers, you can't render yourself invincible, and you left your parachute at home. For most people, this would be the end...

But no, you're not like other people. You have a way to survive your immense fall. Make your fall speed even higher and smash into the ground at an even higher speed, to make the laws of reality fold in on themselves and escape from your situation unscathed, or at least, far better off than you would have been if you'd just let gravity take its toll.

This is usually just an oversight; if the game ignores velocity-induced damage for certain special moves such as activating a grappling hook or using an aerial tackle move, you just use that special move and bypass the fall damage code!