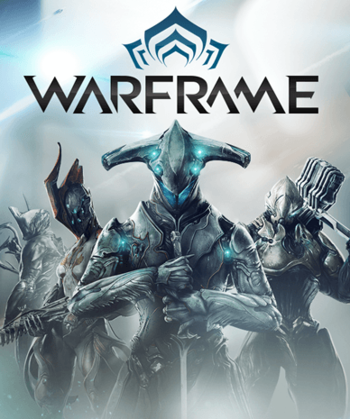 Ninjas play free.
"A new warrior, a new code was born. These rejects, these Tenno, became our saviors. Warrior-Gods cast in steel and fury striking our enemies in a way they could never comprehend."
— Orokin 'Warframe' Archives
Advertisement:

Warframe is a Massively Multiplayer Online Third-Person Shooter by Canadian developer Digital Extremes that vastly expands on the gameplay, story and concepts introduced in the 2008 third person action game darkSector and is considered by the dev team to be everything that the latter game should have been.

The future is here, and everything sucks. The world as we know it is long gone. The aftermath of the Old War against the Sentients has destroyed the ancient Orokin Empire that once lead the humans of the Origin System into a Golden Age, and scattered the Tenno across the known universe. These masters of the blade, the gun, and the mighty Orokin combat platform known as the Warframes lie dormant in cryosleep.

The fascist, militaristic Grineer Empire is subjugating and crushing its way through the Solar System with a flood of degenerating clones, sustained by perverted science. Humanity lives in terror of the Twin Queens and their cronies, who rule with an iron fist and slaughter with impunity. Anything they can't annihilate or rule is bought and sold by the Corpus, a machine-obsessed, profit-worshipping merchant alliance/cult of backstabbing sadists who'll kill each other for a few credits and run the interplanetary Solar Rails, seeking to recover ancient artifacts at any cost, enslaving populations and profiting from their endless proxy wars. And what the Corpus can't buy is infected by the virulent and ancient Technocyte Plague that preys on both, twisting them into horrifying Infested that exist only to destroy, consume, and assimilate. And somewhere, caught in the middle of all this, are the regular people, independent colonies, and ragtag groups unaffiliated with these monolithic superpowers, desperately trying to avoid assimilation or destruction.

In response, the mysterious Lotus begins reactivating the Tenno en masse to free the solar system, protecting the helpless and stealing back Orokin artifacts each faction has hoarded.

The Tenno must band together against the hostile factions. They must steal, kill and sabotage to reclaim their Origin system while saving any of their number that fall into enemy hands. Each mission is a fast-paced PvE shoot-and-slash romp, with both combat forms flowing seamlessly together. There are no bots: if you have no teammates, you're forced to go alone, and stealth becomes the better part of valor. Between missions, you can upgrade your weapons or manufacture new ones. The titular Warframes — the game's characters or classes — are also unlocked by way of manufacturing them from blueprints and materials.

Of course, the Tenno are not alone in their endeavors. Aiding them are the Syndicates, paramilitary organizations who stand in opposition to the Grineer, the Corpus, and often each other. And in spite of the chaos engulfing the Origin System, independent communities of civilians still eke out their existence; On Earth, the humble, secretive Ostrons fish and trade on the Plains of Eidolon, watched over by an ancient, sentient Orokin superstructure that defends them against encroaching threats. Venus, terraformed during the Orokin Era, holds Fortuna, a Corpus penal colony where the hardworking, yet rebellious Solaris labor tirelessly to see their debts settled. And on Deimos, the Infested-dominated satellite of Mars, the ancient Entrati family has learned to coexist with the Infection that has otherwise completely engulfed their home planetoid, where they research a cure to their condition, new ways to annoy each other, and really whatever else they feel like.

The Tenno must work with these factions to help end the troubles plaguing the system and lead it into a new era of peace. However, the Grineer, Corpus, and Infested are not the only threats out there; remnants of the Old War still linger in the depths of space, and some have begun to reawaken, eyeing the Origin System with malicious intent...

Digital Extremes is unusually interactive with their playerbase and frequently makes balance and aesthetic changes based on outpouring community feedback, contrary to the tendency of general MMO service providers to fall back on vague statistics or appeal to a Silent Majority. As a result the game is rapidly evolving as it grows. The developers even caught Sony's eye, and were invited to bring the game onto the Playstation 4 as a launch title..

An Xbox One version was announced for E3 2014 and released on September 1st. On July 7th, 2018, Panic Button announced a Nintendo Switch port, released on November 20th, 2018.

. The TV Tropes Warframe community can be found in this thread