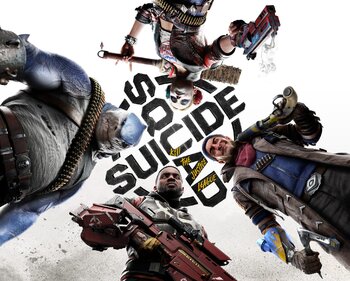 Don't be a hero
"Task Force X: Your new mission is to kill the Justice League"
— Amanda Waller
Advertisement:

Suicide Squad: Kill the Justice League is a video game based on the Suicide Squad of DC Comics. Developed by Rocksteady, the creators of the Batman: Arkham Series, it will be released in Spring 2023 for the PlayStation 5, Xbox Series X|S and Microsoft Windows.

Set in the same universe as the Arkham Series, Harley Quinn, Deadshot, Captain Boomerang and King Shark, members of "Task Force X", are ordered by unit leader Amanda Waller to head into the besieged city of Metropolis and assassinate the Justice League, which has been brainwashed by Brainiac.

Like the Arkham Series, combat will play to the strengths of each member of the Suicide Squad, mixed with elements of gun-play. Unlike the Arkham games, Kill the Justice League will allow players to tackle the story by themselves, switching between Squad members as needed, or with upwards to three other players via Co-Op Multiplayer.