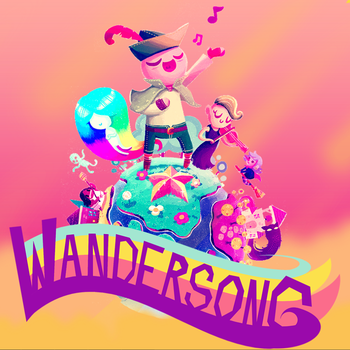 "All the things that you will see, and you certainly will be free, if you wander over yonder, just you and me!"note Left to right: Langtree Ghost, Eyala, The Bard, Viola, and Miriam.
"I'm just a bard but I'll work hard / to show them what's inside"
— The Bard, "I Wanna Be A Hero"
Advertisement:

The world is ending, but you're no hero; just a Quirky Bard. So what do you do? Why, sing, of course!

, by Greg Lobanov, is a Genre Mashup of a game, containing elements of puzzle games, platformers, adventure games, and of course, rhythm games.

Long ago, the goddess Eya created the world and everything in it. You play as the Bard, an everyday (if not rather odd) singer who, in a dream, finds that, sometime soon, the world is about to be destroyed to start anew, as has happened many times before. The Angel, a messenger of Eya, informs them of the situation and the existence of the Earthsong, which can save the world, known by the seven Overseers who watch over it. Resolved to prevent the erasure of the land they love, they go on a quest to learn the pieces of the Earthsong that can save the world. On the way, they meet Miriam, a dour, sarcastic witch who accompanies them on their quest, and Audrey Redheart, The Hero chosen by Eya to save the world.

What follows is a funny, silly, heartbreaking, tense, and poignant story...along with a lot of singing.

In Wandersong, the player can run and jump, just like in any platform game, but the crux of the gameplay comes from your ability to sing: by tilting the right stick in various directions, you belt out a note. Effects this has include causing animals to follow you, calming angry ghosts, navigating the sea, and getting people to yell at you.

It was released for PC via Steam and for Nintendo Switch on September 27th, 2018, with a Playstation 4 version following on January 22nd, 2019.

This game features a LOT of fun twists and turns, so even unspoilered text might be considered spoilers! You've been warned.

The Bard and the Pirates

The Coffee Pirates swear by their coffee, and urge the Bard to have a cup of their own. When they do, however, things go a bit... haywire.

The Bard and the Pirates

The Coffee Pirates swear by their coffee, and urge the Bard to have a cup of their own. When they do, however, things go a bit... haywire.