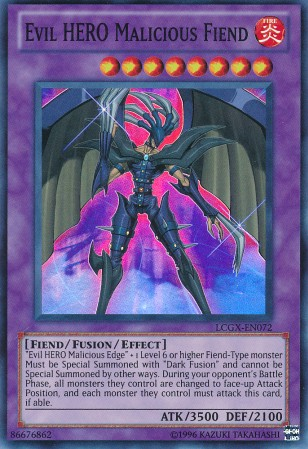 His name says it all. He's evil, malicious, a fiend and a hero, too.
"I know what it means to be a hero, Commander. And trust me - you are no hero."
— Robin, to Commander Uehara, Teen Titans: Trouble in Tokyo

You might be thinking, "What are you talking about?" or "How does that even make sense?", which is very reasonable. It does sound like an oxymoron doesn't it? Everybody knows what a hero is, and everybody loves a hero. In fact, a hero, by definition, is a good guy, the one who saves the innocent from the forces of evil, showing children of all ages what a hero does for them, encouraging them to not live in fear, to one day stand up tall and become the next hero everybody looks up to for protection. All of that is nothing an evil villain would do, right?

Here's the thing. There are professions that people almost instantly identify with heroism: police officers, soldiers, park rangers, doctors, presidents and the like, viewing them as the kind of humans that they would want their kids to grow up to be, so they can live successful and promising lives and still be seen as heroes (no powers recommended).

But that is not always the case.

Sometimes, the bad guy comes in the form of a familiar friendly face, one that people are meant to see without any worry and think that they are safe, until they get a closer look.

This is what happens when Nominal Hero meets Villain with Good Publicity: a definite bad guy works as a cop or even a so called "firefighter", and, despite their actions, whether due to ignorance on The Government's part, or the fact that they simply didn't get fired or resign yet, or haven't been caught yet, still qualify as such. In short, a bad guy with a "good guy" job.

Unfortunately, this allows them to do their evil behind the scenes, disgracing the name of the position they wear, and either people don't notice, or they can't do anything about it. It is during these times that people wait for and cheer when a true hero, of whatever size, comes to the rescue, demonstrating how a hero REALLY does it, the right way.

May or may not overlap with Pragmatic Villainy or Noble Demon, as they might actually do their job accordingly every now and then, but the reasons for them are less likely because Even Evil Has Standards, and more to just maintain the facade.

Contrast Hidden Heart of Gold and A "True" Hero.

Not to be confused with Villain Protagonist.