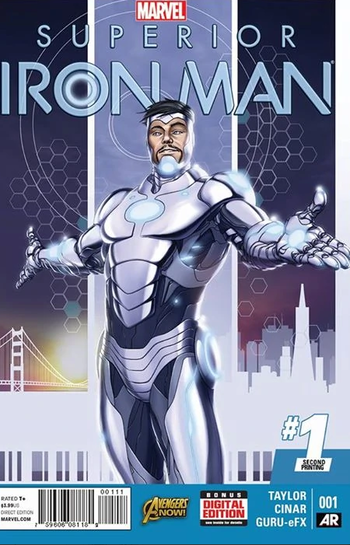 During 2014's AXIS event, many heroes and villains had their personalities magically "inverted", with heroes becoming villains and vice versa. Among these was Iron Man, who had all of his positive traits stripped away and his flaws cranked up to eleven. This brings us to Superior Iron Man, a nine-issue miniseries written by Tom Taylor (All-New Wolverine, X-Men: Red) focusing on Evil!Tony's escapades in San Francisco while he exploits his intellect and "hero" image.

The series was cancelled in time for the AXIS conclusion, which saw most of the heroes and villains reverted back to their original personalities, but Tony ensured that he remain the same. However, post-Secret Wars (2015) he went back to normal with no explanation.

Despite what the title implies, it has nothing to do with Superior Spider-Man aside from having a similar premise.