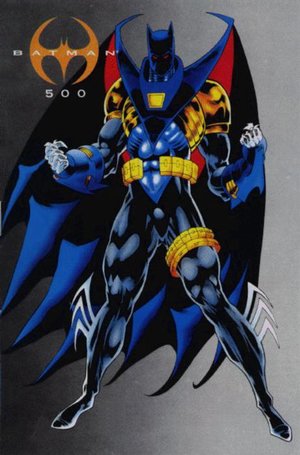 "I'm the goddamn Batman, and I'll kill you!
In the name of God!"
Robin: The old Batman would never descend to this level!
Azrael-As-Batman: The old Batman was created for older times.
— Knightfall
Advertisement:

Over the course of a long-running series, something happens to the main character. He loses his powers, makes a Heroic Sacrifice, or gets Older and Wiser and decides to retire. Sometimes they Dropped a Bridge on Him, or Put Him On A Bus. In a word, he's gone. But the story still goes on! His role is taken by a Suspiciously Similar Substitute, but one with a very different characterization. He's how the original hero would be if he were a Jerkass, Anti-Hero or (most commonly) '90s Anti-Hero.

Depending on how he's portrayed, he may be a Replacement Scrappy (especially if the original character were good on his/her own and the fans already like him/her) or a refreshing change (often happens if the fans are tired of having to look at the same hero over and over again). Sometimes the substitute may even be liked more than the original.

This happened a lot during The Dark Age of Comic Books. Back then, it was common to presumptuously expect readers to like the new character, but writers have gotten savvier since then. Now, the Darker and Edgier version of the hero is commonly portrayed as a villain or a psychopath (or, sometimes, be redeemed), as the '90s Anti-Hero archetype has grown less popular over time. Some heroes were put through this in order to show why a hero shouldn't become Darker and Edgier as a subtle Take That! to the fandom. For example, Super Patriot replaced Captain America temporarily in the 1980's to show that the Cap'n wasn't the jingoistic, nationalistic unthinking supporter of the United States government some fans thought he was or wanted him to be.

Subtrope of Suspiciously Similar Substitute. May overlap with Costume Copycat. Could be an El Cid Ploy gone bad. Contrast with the Redeeming Replacement.