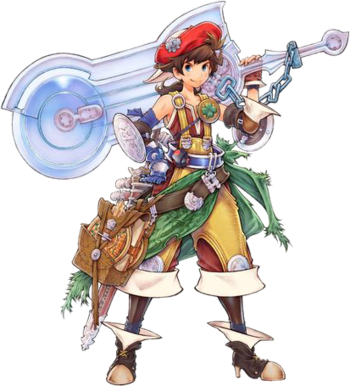 Two belts is too many when the second is for an utterly useless scabbard which is far too small to carry your pizza cleaver!
"Hell, stop making every character look like their clothes were chosen by blind clowns. That would HAVE to save some time."
— [GM]Dave, Bannable Offenses

Some characters wear a realistic outfit, to the point that a cosplay of them might be relatively simple. But this gets kind of boring; it's not a challenge for the cosplayer to put together, and very few people will actually realize that they are in costume. (Which might explain why even mundane series tend to gravitate towards unique school uniforms and such).

Sometimes the character designers realize that their characters' wardrobes are too realistic. One way to compensate for this is by mixing bits and pieces of what might be a number of perfectly acceptable outfits into a bizarre Frankensteinian mess. The outfit may be comfortable, but something about it just looks slightly, but not totally, off.

Often involves Too Many Belts, Goggles Do Nothing, Virtual Paper Doll (with some questionable mixing and matching), Impossibly Tacky Clothes, Fashionable Asymmetry.

An especially bad example may have you asking, "WTH, Costuming Department?".

This is typically justified in settings where characters are forced to scavenge and fabricate clothing or armor from whatever scraps they have at hand. It's especially prominent in Post Apocalyptic fiction.

See also Rainbow Pimp Gear, where video game characters achieve this effect due to their ideal gear being unfortunately mismatched, Seriously Scruffy (when the character's odd outfit is down to stress), and Improvised Clothes.

Contrast Pimped-Out Dress, which could have loads of accessories, but (usually) in a stylish manner.