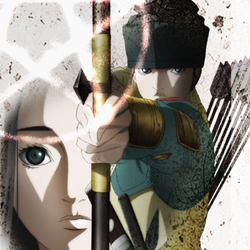 Hikaru disguised as her brother (right) and with her hair down (left).
Advertisement:

Otogi Zoshi is an anime produced by Production I.G, which follows the story of Hikaru and a number of people surrounding her. While at first it may look to nothing more than Historical Fiction with fantasy elements mixed in, that's only true of the first half. Halfway through, the series goes through a combination Timeskip / Genre Shift to present day where strange Urban Legends keep coming true. The two plots do overlap.

The first half (episodes 1-13), labeled the Heian Arc, appropriately takes place in the city of Heian (modern day Kyoto) during the Heian Period. Heian is becoming a corrupt and run-down city. Selfish samurai and onmyoji, who care only about gaining political power, are everywhere. To make matters worse the city is suffering from famine and widespread disease. To combat this, the Imperial Court decides to send Minamoto no Raikou, a famous samurai well-known for his archery skills, to recover a legendary gem (a magatama) said to hold mysterious power to save the world. However Raikou falls ill, so his sister, Hikaru, disguises herself to make the journey in his place. Traveling along with her guard, Tsuna—though she's quite combat capable herself—she meets many people and learns that the situation is more complex than it first seemed.

Most of the story's second half (episodes 14-24) makes up the Tokyo Arc. It follows the same group of characters from before, except they've been reincarnated into modern day Tokyo. There Hikaru lives the life of a mostly Ordinary High-School Student. She also acts as the landlady for the Villa Minamoto apartment complex, where her friends and tenants Tsuna, Sadamitsu, Urabe, and Kintaro live—though timely rent payments are left to be desired. But one night, on the one year anniversary of her brother Raikou's disappearance, Hikaru suddenly gets a lead on where he went. While following Tsuna on an odd job based around an urban legend, Hikaru spots her brother on a phantom train... Though Tsuna saw nothing, she's determined to investigate. The next day she gets an even bigger set of clues in the form of strange photos taken by Raikou. Like clockwork, incidents happen one after another in the photographed places, with Hikaru (and her friends) getting involved each time. At the same time, a mysterious man in a trenchcoat keeps appearing, warning Hikaru to stop.

The series finishes off with two "Special Arc" episodes that takes place before the start of the Tokyo Arc proper. One follows Urabe, and the other, Mansairaku.

It was later adapted into a two-volume manga.