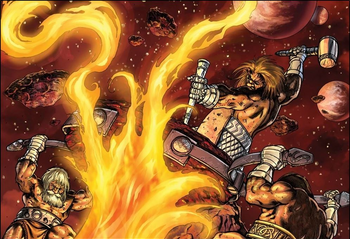 "For Gods and for mighty Kings.
Uncrushable shields, Power-belts and magic Rings,
Swords that never miss, Scepters and Crowns and other things."
— Falconer, "Lord Of The Blacksmiths"
Advertisement:

The Ultimate Blacksmith is the only person in the world that can turn that ingot of Phlebotinum into the Infinity +1 Sword. They often live in isolation, usually some place where they have access to the planet's natural ores like a deep cave or near a volcano. They might even be a god; one of the Stock Gods is a 'god of the forge', which makes their handiwork also count as Forged by the Gods.

Sometimes they may be reluctant to make weapons for anyone, even the hero, and may have sworn never again to forge an instrument of bloodshed. In this case, they must be persuaded to do so, for which money will likely have little effect, but appealing to saving the world might. If persuaded, they will probably feature as the star of a Forging Scene.

Compare Sword of Plot Advancement and Ultimate Forge. See also The Blacksmith. The weapons they forge may be so absurdly sharp that Like Cannot Cut Like. Unrelated to Master Forger. Sacred Flames may be involved in their forging process.

TWA god of the forge

The stock forge god TWA uses in his pantheon.

TWA god of the forge

The stock forge god TWA uses in his pantheon.