Theatre / The Ring of the Nibelung 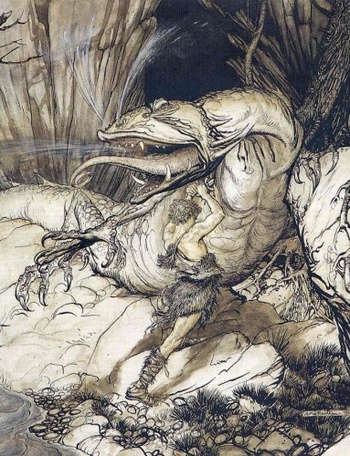 Der Ring des Nibelungen ("The Ring of the Nibelung"Translation note this is sometimes mistranslated as the plural "Nibelungs", but the singular is correct — the Nibelung referred to is Alberich. The name "Nibelung" (literally, "mist-descendant") refers to the race of dwarfs to which Alberich belongs. This particular noun is declinated in German, which results in the ending "-en".) is an epic cycle of four operas by Richard Wagner (hence the alternative term, the "Ring Cycle," which is sometimes applied to the whole).note Wagner himself eschewed the term "opera" as applied to these works, preferring to refer to them as "Bühnenfestspiele", "stage-festival-plays"; the term "music-drama," though also rejected by Wagner himself, is generally preferred by his followers. The cycle premiered at the Wagner Festival Theater in Bayreuth, August 13th-17th, 1876, though the first two sections of the work had already appeared at the Munich Court Opera in 1869 and 1870.

The staging of the work proved problematic. Wagner had the typical Teutonic and 19th century fascination with history, and instructed his scenery and costume designers to emulate as closely as possible the Ancient Germanic setting of the original legend.note which, oddly enough, despite the cycle's legendary setting, can be dated historically pretty exactly to the year 437 A.D. by the destruction of the Rhine-based kingdom of Gunthaharius (Wagner’s Gunther) by the Huns Unfortunately, that particular period was (and still is) a particularly obscure one in terms of social history, and Carl Döpler’s designs, though in accordance with the best knowledge of the time, were largely based on ceremonial costumes, in some cases extrapolated backward from much later sources.note The effect is somewhat like trying to imagine the civilian costume of George Washington from looking at the dress uniform of George S. Patton. Hence the rather silly looking Horny Vikings costumesnote which Wagner’s wife Cosima famously compared to "Red Indian chiefs" and settings that still inform most people's mental image of the Ring. Furthermore, the spectacular scenic effects that Wagner intended, his dwarfs and dragons, gods and nixes, his bear and rams and serpent and ravens and wood-bird, even his rainbows, mists, rivers, caverns, and mountains, have afforded nightmarish problems from the very earliest presentations of the work. (Legend has it that the dragon’s neck was unavailable in the first performances, having been sent by mistake, not to Bayreuth in Bavaria, but to Beirut in Lebanon.) Nevertheless, Wagner’s dramatic technique was highly influential, to the extent that it colored the general public’s very conception of what "opera" is.

Works that adapt The Ring of the Nibelung: