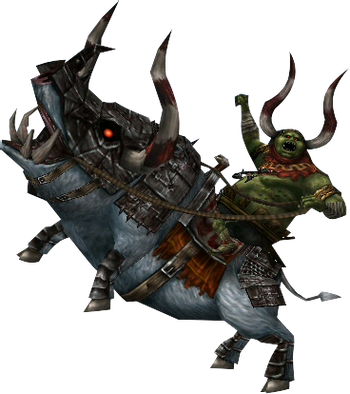 In Twilight Era Hyrule, bacon eats YOU for breakfast!
"You think you can take me? I ride a pig! Who do you think you are?"
— GanXingba, while playing Sejuani
Advertisement:

Basically, pigs with tusks and a personality to match. While non-tusked swine are generally shown as gluttonous and somewhat messy, boars are generally seen as their Ax-Crazy cousins. Why? Basically, pig noses are awesome and adding Spikes of Villainy should only make them even more awesome!

This is Truth in Television, as wild boars can be dangerous and are quite capable of killing a man. Boar-spears were designed with specially shaped spear-heads to keep the animal at arms' length because otherwise a boar could still kill you even after you'd stuck a spear through it, even if doing so involved it charging down the spear and goring itself in the process. Even then, those spears were more commonly used by hunting nobility who were in it for sport, as traps were still much safer.

Wild boars have one of the worst reputations among wild ungulates. They are said to be prone to attacking and killing humans, especially if you stumble upon a sow with piglets. At least, this is what most people think about these animals. In Real Life, boars are no more inherently aggressive than most other ungulates (although unlike other ungulates they are omnivorous and will take prey as large as turkeys). They'll generally only charge creatures as big as humans if provoked; they do battle only for self-defense against their predators.

It's true, however, that sows might charge if they see their young menaced; but again, this is a common thing among wild mammals. Try to menace elk or deer fawns and you'll probably get a similar response. And nobody in Fictionland seems ever to consider that baby boars are among the cutest young mammals, with their brightly colored stripes. Never mind boars are among the most intelligent ungulates in Real Life, they are easily tamed if raised young and can be used in the same way as their domestic tusk-less descendants (like searching for truffles).

Boars, rhinos, and bulls are the only ungulates that regularly qualify as bad guys — or at least very morally ambiguous — in pop-consciousness; the Celtic branch of Heroic Fantasy is particularly likely to have magical and very dangerous swine. See also What Measure Is a Non-Cute?.

To be fair, there were warning signs of boar sightings posted around the park.

To be fair, there were warning signs of boar sightings posted around the park.