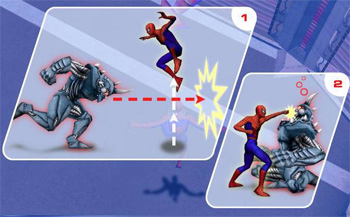 Tactics also apply in case of Rhino Rampage.
"That looks distinctly like a target. And here we have a bull. Hmm... I think I get the idea now!"
— Conker, Conker's Bad Fur Day
Advertisement:

This is a Bullfight Boss. After charging at you, it is usually vulnerable for a few moments before regaining its senses. Sometimes, it throws a couple long-range attacks at you before charging again. Sometimes, it tires out after charging several times and is vulnerable, or may have this type of attack in its attack pattern. Sometimes, it has a weak spot on top which you must hit as you are sailing over it. And sometimes, simply dodging the charge isn't enough, the only way to beat it is through Deadly Dodging, baiting the boss into a stage hazard (which may harm it directly or leave it vulnerable). Usually an easy boss to fight. (Usually.) If it's an actual bull, you can probably puzzle out the color of the item needed to provoke it into charging.

Related to the second type of Puzzle Boss.