Film / Beasts of the Southern Wild 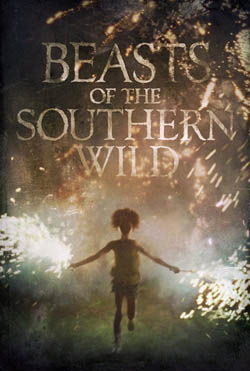 Once there was a Hushpuppy, and she live with her daddy in the Bathtub.
Advertisement:

Beasts of the Southern Wild is a 2012 movie directed by Benh Zeitlin. It follows the story of six-year-old Hushpuppy (Quvenzhané Wallis) who lives with her father in a place called “the Bathtub”, a southern community on the edge of the world, blocked off from civilization by a huge levee. Hushpuppy and her community face destruction from the changing environment, including a mass flood and prehistoric beasts released by the melting ice caps. Meanwhile, Hushpuppy’s father, Wink (Dwight Henry), is suffering from a mysterious illness.

It was nominated at the 2012 Academy Awards for Best Picture, with 9-year old Quvenzhané Wallis becoming the youngest person ever to be nominated for Best Actress. The movie itself lost to Argo, while Wallis lost to Jennifer Lawrence.