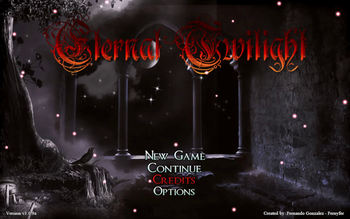 Eternal Twilight is a RPG Maker MV game developed by Fernyfer775 in 2018.
Advertisement:

Humans and Magi once lived in peace, but The Empire now seeks to commit genocide on the latter, citing the dangers of using Blood Magic. At the same time, a mysterious group of Blood Magi are involved in the conflict, working against both the Empire and the peaceful Magi. Luna, a human archer, ends up a fugitive alongside Damien, a White Magi, simply by being in the wrong place at the wrong time. The two team up with a cast of colorful characters, who also have a beef with the Empire, and gather both human and Magi allies to put a stop to these forces of evil.