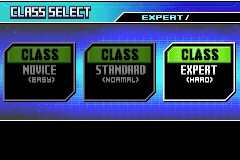 You've tried, and tried, but because The Computer Is a Cheating Bastard, you just can't win. But wait! You can just change the difficulty level, and now victory is assured!

Many strategy games, RPGs, and action games have difficulty levels. Often, you start the game at 'Normal', though sometimes at 'Easy', then work your way up. Some strategy games will let you change difficulty level between scenarios, letting you tackle a particularly challenging stretch without being frustrated by Nintendo Hard difficulty.

Generally, games with difficulty levels will run on a scale that includes some or all of the following:

If some or all of the difficulties have different names from the above (virtually guaranteed if it has more than the three middle ones), it's a case of Idiosyncratic Difficulty Levels. Of course, different developers have different ideas as to what constitutes "Normal"; many Nintendo Hard games only have "Easy" and "Normal" difficulties, and in some of these cases even "Easy" is highly difficult. Other games pull the opposite, creating a form of Rank Inflation where there are several "Harder Than Hard" difficulties that aren't all as hard as proclaimed.

Other games may feature difficulty levels which are idiosyncratic in more than just name. A prime example is games offering a Story Difficulty Setting: a difficulty setting in story-driven games designed to accommodate players who just want to experience the story and don't care much for the gameplay. Another example is the Arrange Mode, where elements within the game are remixed in another mode to give a new challenge.

Most console video games of the early 1980s that had multiple difficulty levels didn't give them names, and combined the act of starting a new game with selecting one of the numbered or lettered difficulty options. "Game A" and "Game B" were the standard options in Game & Watch and early Nintendo Entertainment System games, while many Colecovision games used the numeric keypad for this purpose.

There are two main kinds of AI and how the difficulty level interacts with them:

In addition, many simulation and strategy games feature realism options that can be used to shut off certain complex features of the games, making them easier for newcomers to tackle.

Many old school arcade games have difficulty levels which can only be set by the arcade's owner via DIP switches; these different settings are usually not visible to players, except in console ports that replicate some of them. Many arcade games allowed the player to influence one element of difficulty, the number of lives, by feeding extra credits.