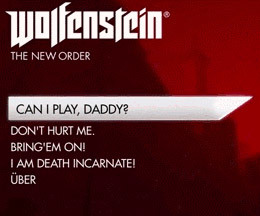 Many video games have adjustable Difficulty Levels so as to provide more of a challenge to good players while allowing poor players the satisfaction of finishing and finding out how the story ends. Traditionally, they would just be called Easy, Medium, and Hard (or synonyms like Beginner, Intermediate and Expert). However, a recurring clever idea is to name them in a way reflecting of your game's style or plot. Another widespread trend is to make one of the difficulty settings a Title Drop, typically the hardest one. One frequent convention is naming the difficulty levels after increasingly badass figures, and (optionally) naming the lower difficulty levels after something insulting.

Of course, if you use more than one word, everyone will call them "Easy", "Medium" and "Hard", but it does help establish continuity and mise en scène.

Often overlaps with Easier Than Easy and Harder Than Hard (which are not about the name, but about the kind of challenge offered).

Only unusual examples should be added to this article.

See also Easy-Mode Mockery, where the idiosyncracy extends to your treatment in the gameplay. For comments on your gameplay, see Idiosyncratic Combo Levels.

Examples (listed in order from easiest to hardest):