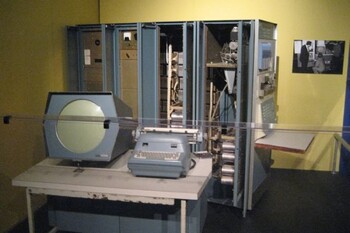 "The game is of such a character that it requires care and skill in playing it or operating the device with which the game is played. Skill can be increased with practice and the exercise of care contributes to success."
— 1947 Patent for the Cathode Ray Tube Amusement Device
Advertisement:

The Cathode Ray Tube Amusement Device was an early form of interactive electronic game, introduced in 1947. It is considered one of the earliest known video games, if not the earliest. Thomas T. Goldsmith Jr. (1910-2009) and Estle Ray Mann created the game by using a cathode ray tube and analog circuitry. The game was a relatively simple missile simulator.

The player would sit or stand facing a video screen mounted in a cabinet. The screen depicted a simulation of a radar display, with the airplanes and other targets painted onto a transparent overlay, typically paper. The player then used a control knob to position the CRT beam on the screen, depicted as a dot and simulating a missile. They had to maneuver the dot to overlap a given target, then fire at the target by pressing a button. This all had to be done within a time limit. If the target is hit, the beam defocuses, simulating an explosion. The circuits could be altered to make targeting more difficult.

Unfortunately, the prohibitive equipment cost prevented any commercial use of the game. Only a limited number of handheld prototypes were ever created. Goldsmith is better known as a director of research and vice president of DuMont Laboratories, a company manufacturing television equipment, the same company behind the DuMont television network; his name is in the callsign of WTTG-TV in Washington, D.C., originally one of DuMont's three owned-and-operated stations and now one of Fox's five O&O's.

The Amusement Device provides examples of: