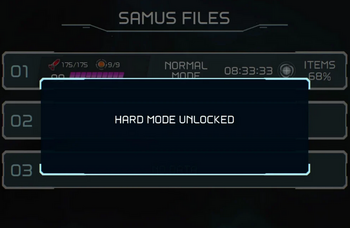 Some video games with Difficulty Levels don't just hand over the keys to everything immediately. Occasionally you need to earn the right to play them, which typically requires beating the game at least once.

This gating of content is frequently reserved for the Harder Than Hard difficulty. There are multiple possible reasons for this: it could be meant as a bonus for players that prove they're hardcore enough to beat the vanilla hard mode, it encourages players trying out the vanilla hard mode before letting them jump right into the Harder Than Hard mode, and/or helps pad out game time by encouraging multiple playthroughs.

Mercy Mode is a subtrope where an easier than normal mode is unlocked when you do poorly.

Subtrope of Unlockable Content. As mentioned, may lead to Fake Longevity, especially if Hard Mode Perks are involved. Related to Earn Your Fun, when more skilled gamers find the default difficulty levels too easy for their tastes. Compare New Game Plus, in which a subsequent playthrough carries over content earned the first time around; the game may be made more difficult to compensate.