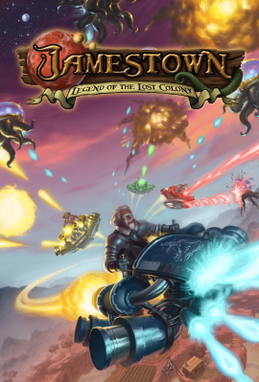 Mars beckons. Bring your friends.
The year is 1619, and I have just escaped execution at the hands of my own king.
I might have died in peace, but for the burning need to clear my name.
Destiny has brought me here, to the edge of human exploration.
Some call this place the New World.
The Romans called it...
Mars
— The intro of the game
Advertisement:

Jamestown: Legend of the Lost Colony is a Vertical Bullet Hell Shoot 'em Up created by a Philadelphia-based trio of developers known as Final Form Games. It's the first game by the company, done for the art and funded through the developers' own savings.

The game tells the story of a man named Walter Raleigh (Sir Walter Raleigh, to be exact, if we can assume that this is the same famous explorer), an Englishman who has escaped from prison when he was about to be executed for an unknown crime (the actual Sir Walter Raleigh was executed for supposedly being in the Main Plot against King James). In an attempt to clear his name and earn the pardon of the British king, he travels to Jamestown, one of the British colonies in the new world, in hopes of earning glory and fame.

Only, these are not the colonies you know.

You see, this is a Schizo Tech version of the colonial era, with airships capable of taking off into space, and man has colonized Mars. The colony of Jamestown in particular is set in contested territory, with the English fighting against a joint effort between the Spanish and the indigenous Martians. After barely surviving a recent attack, Raleigh flies onward searching for The Lost Colony of Roanoke. From there, the clues in the way slowly bring our protagonist towards the uncovering of an Evil Plan engineered by the Spanish general that may put all of the colonies in danger.

The game can be purchased on Steam. An expansion, Gunpowder, Treason & Plot, was released on November 10, 2011, featuring four new playable ships (including one that can mimic some of the abilities of the other seven). An Updated Re-release, Jamestown+, was released for PlayStation 4 systems on March 17, 2015, adding three more new ships and a pair of new stages that take place on Phobos and Deimos, the moons of Mars. It was eventually ported to Steam in December, 2019 with a Nintendo Switch version following suit.

Jamestown: Legend of the Lost Colony — in which the game and its following tropes are described thusly:

Henceforth, you shall be known as the TROPER WITH NO LIFE.