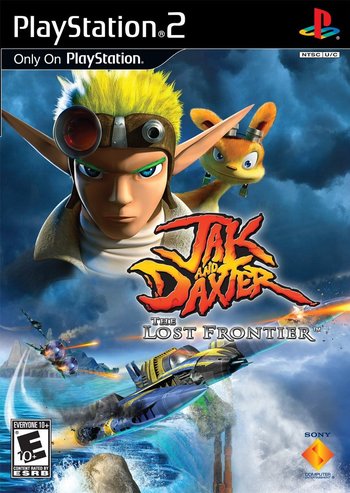 The fate of their world is in your hands.
"Why did I agree to go on this crazy quest with you guys? Find eco... save the world... I wanna go home!"
— Daxter
Advertisement:

The sixth installment in the Jak and Daxter series developed by High Impact Games and co-developed by Naughty Dog and the second game in the series to be released to a console outside the Playstation 2, the PlayStation Portable. The first game being Daxter.

The game is set a short time after the events of Jak X, with Jak and Daxter helping Keira on her quest to finally become an eco sage, like her father Samos. On top of this, the trio are also on a mission to solve the eco crisis that has caused the planet to slowly kill itself due to a sudden shortage in eco making remaining eco unstable. With their sturdy, customizable Hellcat they travel to the Brink in search of more eco, where they're suddenly attacked by eco pirates led by Captain Phoenix. The confrontation causes the Hellcat to leak fuel forcing them to make a crash landing on a nearby island.

While mostly made by a different developer, the mechanics of the earlier games are still present within some of Lost Frontier's gameplay. Jak's sections are still focused on a mix of linear platforming segments and fast paced gunplay with new unlockable eco powers that add variability to the platforming and combat. Jak's Dark Form from the previous games is no longer present with his abilities instead focused on the four other types of eco introduced in the The Precursor Legacy. Daxter's sections have changed with the introduction of his own Dark Form, aptly named Dark Daxter, where he can fire dark eco energy balls, gains super strength and a vicious cyclone attack.

However, the majority of the Last Frontier's gameplay departs heavily from previous installments with the introduction of airship gameplay, which has a heavy emphasis on customization and vehicular activities. You have an airship in the form of the Hellcat you start the game with and other ships you gain as the story progresses which you will use to traverse the Brink, access the various hub worlds to upgrade your ship and Jak, complete side quests, and battle Sky Pirates. Each ship is unique in how it can be customized and will require special unlocks to be used to their full potential. Like previous games in the series it received mostly positive reviews, but was a huge Base Breaker with fans of the original trilogy and didn't sell as well as previous titles.

Tropes Used in this Game: