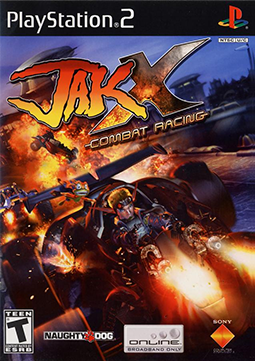 Roar through Jak's world in a race to the death!
Advertisement:

A Vehicular Combat game set in the world of Jak and Daxter, and the last game in the series to be developed by Naughty Dog. Jak and friends receive invites to the distant Kras City to hear the reading of Krew's last will and testament. The will includes a request that all present, including his daughter Rayn, toast his memory with a "special vintage" he's prepared before starting the video will proper. Surprise! Turns out that vintage was spiked with a slow acting poison and the only way to get the antidote is to compete in and win the Kras City Grand Championship, the deadliest and most popular sporting event on the planet! Krew had a bet with rival Kras City crime lord Mizo that the winner will inherit all of the other's dirty business and Krew is determined to win even if it's from beyond the grave. Now Jak, Daxter, Torn, Ashelin, Rayn and Keira must race like their lives depend on it...