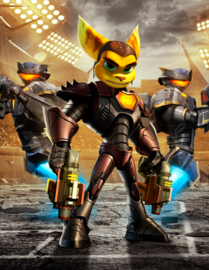 In this battle... only one will survive.
"Greetings, hero, and welcome to DreadZone. Rest assured, you are now far out of the reach of hope. There will be no rescues, no pardons, no possibility of escape. You are now a contestant on the greatest holo-vision program the galaxy has ever known. Chances are you'll be dead by tomorrow, but those of you who play the game with skill and strategy will earn a chance to win your freedom."
— Gleeman Vox

The fourth game in the Ratchet & Clank series, released as Ratchet: Gladiator in Europe and Australia, and is considered by many to be by far the darkest entry in the series.

After succeeding in foiling Dr. Nefarious' plot to destroy organic life, Ratchet continues his work onboard the Starship Phoenix alongside Clank and Big Al. However, the trio is soon kidnapped by Gleeman Vox, a sinister TV executive who wants Ratchet to be a contestant on his The Running Man-esque gladiatorial combat show "Dreadzone". What's worse, it's an offer Ratchet and friends can't refuse, as they've been fitted with explosive collars that'll blow their heads off if they decline to participate... or if they're just not up to snuff compared to the other competitors. With no other options, Ratchet must fight to earn their freedom, all while getting constantly slandered by Vox. Unfortunately, Clank isn't directly helping Ratchet this time, but he's still not alone in the field; two combat robots named Merc and Green become his backup, helping him destroy enemies, hack objects, and get around. That's good, because Ratchet will need to rely on whatever help he can get to escape this place where heroes are forced to kill each other.

Befitting of the nature of Dreadzone, Deadlocked greatly reduces the platforming sections of the series, turning many of them into health-reducing hazards rather than perilous one chance challenges, and instead focuses on straight combat with bigger and badder weapons and enemies.

An HD version of the game was released on the PSN in 2013; it was free as an apology to those who waited for the Vita version of Ratchet & Clank: Full Frontal Assault to be released. It was released in May in North America, and Europe and Australia finally got the game after four months, in September.

"Ratchet? Clank? It's me, Captain Qwark! There's a nasty rumor going around about heroes being kidnapped. But don't worry, it's baloney! I mean, come on! Nobody came to capture 'me', right?! Just imagine making a show about galactic heroes without Captain Qwark! HA! Well, anyway, you guys missed the last three meetings of the Qwark Cadets Fan Club! But don't worry, I've got extra copies of the newsletter, and I even saved some of the snacks! Hope you like custard!"