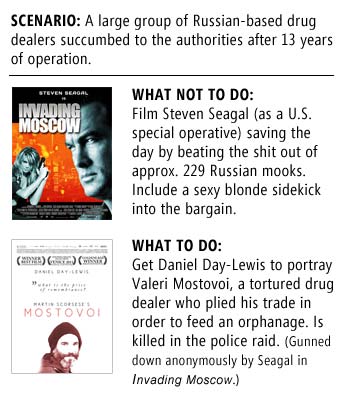 "The diseased/addicted/mentally impaired always get the Oscar."
— "Hollywood Rule Book"

It would be naïve to think filmmakers always make movies according to whatever story they want to tell, and that a prestigious award like an Oscar, if they're lucky enough to be honored with one, is just icing on the cake.

An Oscar is a big deal. It enhances the studio's reputation and boosts future ticket sales. Since around the early 1980s, instead of expecting an Oscar to be a natural side-effect of a film being exceptionally good, studios and producers have often tried to engineer certain films specifically to attract Oscar nominations. Typically, the results are more serious, depressing, or "artistic" films. They're called Oscar Bait, and the practice is also derisively known as "Oscarbation".

The trend started in the 1980s in the wake of the emergence of the Summer Blockbuster, and as New Hollywood ended. Before then, it was a pretty good bet that the most popular movies were also the best ones and thus the likely Oscar winners. But as directors like Steven Spielberg and George Lucas hit their stride, they made beloved and well-received movies which were nevertheless seen as too lightweight to win the "important" categories (acting, direction, writing, and picture) if/when they were nominated. At the same time, the "serious" fare that did win those categories slowly became less popular. While into the mid-'90s it was common for at least one major, mainstream hit to make it to the highest categories when it came to Oscar nominations, and sometimes they even won (Rain Man and Forrest Gump were the highest-grossing films of their respective years, for instance), there was a growing focus from studios on targeting younger audiences with simpler Summer Blockbusters that didn't deal with realistic concerns of people over the age of 30. With fewer and fewer opportunities for "serious" films to get made and widely released at all since the Turn of the Millennium, what ones are made tend to focus on going for the gold and making their studios at least look like they care about True Art.

Such films are usually depressing dramas, Glurgey inspirational films, and examples of man’s inhumanity to man – an abnormally large proportion of Oscar Bait films have been set during The Holocaust. There's also a big focus on mental illness or Inspirationally Disadvantaged characters. It's rare for a comedy film to do well at the Oscars (in fact, one of the biggest cliches of this trope is a comedic actor starring in a heavy-handed drama to be Taken Seriously); sci-fi and horror don't do much better, and animated films were given their own categories once they flirted with pushing into the big leagues. These aren't hard and fast rules; you might see a Dramedy or Dark Comedy get a nomination, mostly because there’s still room for suffering.

The cost of all this is that most Oscar Bait movies don’t do well at the box office. Hype Backlash and Hype Aversion play into that — the heavy campaigning to win an Oscar can be a big turn-off. Furthermore, many Oscar Bait films are released around December or January (as a direct lead-in to the Academy Awards show in late February), so it’s easy to tell them apart from Summer Blockbusters. Perhaps because the Academy can actually tell the difference between a good, honest movie and an Oscar Bait attempt, and partly because sometimes they respect the general public’s opinion of a movie and will try to reflect that, there are many movies that are obviously gunning for awards that don't get nominated at all much less win. (This can mean an Award Snub.) And no matter how genuinely good these kind of films can be, depressing films about people suffering through tragedy, alienation, physical and mental disability and the horrors of the worst periods in human history don't often have the makings of a fun night out at the movies.

The phenomenon isn't exclusive to the Oscars, either; on TV it's "Emmy Bait", on Broadway it's "Tony Bait", and in music it's "Grammy Bait". See also Death by Newbery Medal and Award-Bait Song for the literary and musical equivalents, respectively. Contrast It's Not Supposed to Win Oscars.

Positioning the film to win awards
Subject matter and characters

Films (or otherwise) that come across as particularly obvious in their ambitions:

Oscar Bait
Emmy/BAFTA Bait
Tony Bait
Other
Notable Exceptions
The Oscar Bait trope is so pervasive that it defines the formula that wins Oscars. When a different kind of film wins big, and no one else can replicate that success, it’s worth noting.

Spoofs of this trope: