Film / The Life and Death of Peter Sellers 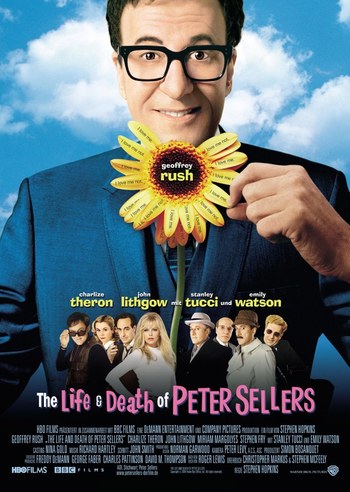 A 2004 Biopic of British comic actor Peter Sellers co-produced by HBO and BBC Films, released theatrically in most of the world but presented as a Made-for-TV Movie in North America.

The film, adapted from a biography by Roger Lewis of the same title, chronicles Sellers' life and career from The '50s and his breakout success on The Goon Show up through the production and release of his pet project Being There at the turn of The '80s (his death came soon after that). However, it focuses mostly on The '60s: He lets an obsession with Sophia Loren destroy his first marriage, finds international critical and commercial success with his collaborations with Stanley Kubrick and Blake Edwards but not without on-set turmoil, experiences an octuple heart attack shortly after marrying starlet Britt Ekland, and proceeds to let that marriage disintegrate as well.

This film is also a tricky example of Postmodernism. It is actually presented as a Show Within a Show that Sellers himself (as played by Geoffrey Rush) is directing and playing all the roles in. Most of the time, the other people "appear" to be played by an All-Star Cast, but from time to time the framework is returned to and said person is revealed to "actually" be played by Sellers...who, remaining in character, lets the viewer in on "their" opinion of him. The viewer is left to wonder if he's trying to draw us into the truth, distance us from it, or both.

This was the first produced screenplay for writers Christopher Markus and Stephen McFeely, who have since co-written The Chronicles of Narnia film adaptations and several entries in the Marvel Cinematic Universe (the Captain America films and Thor: The Dark World, to be specific).