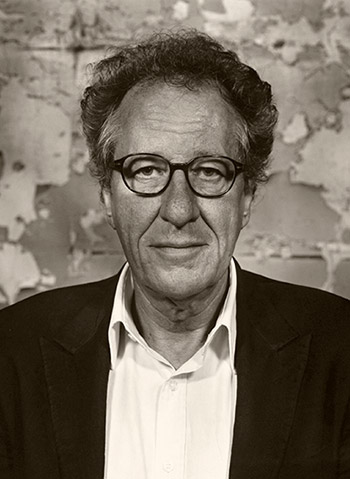 "I was never a leading man. I've always been in the outer concentric circles in the company, being a character actor, which is a good place to be. It gives you that diversity."
Advertisement:

Starting out on the stage in his native land, he made the move to Hollywood productions in the mid-1990s, making his reputation with his performance as troubled pianist David Helfgott in Shine, which won him the Oscar for Best Actor. A slew of roles in popular films followed, including Elizabeth and its sequel (alongside fellow mid-1990s breakthrough Australian Cate Blanchett), Shakespeare in Love, Quills, the Pirates of the Caribbean films and The King's Speech.

Also following were two additional Academy Award nominations, an Emmy, and a Tony, making him a rare winner of the Triple Crown of Acting. In 2012, he won the Australian of the Year award for his innumerable contributions to culture and the arts. Still not as good as a Grammy, though YMMV on that.