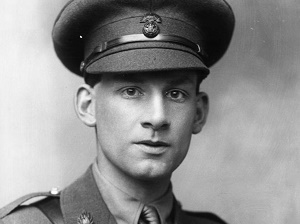 Siegfried Loraine Sassoon CBE (8 September 1886 – 1 September 1967) was an English soldier whose contributions to literature were inspired by his experiences on the Western Front during World War I. Though remembered primarily as a poet, he also penned works in prose, such as the semi-autobiographical Sherston Trilogy (composed of Memoirs of a Fox-Hunting Man, Memoirs of an Infantry Officer and Sherston's Progress).

Tropes in the works of Siegfried Sassoon: