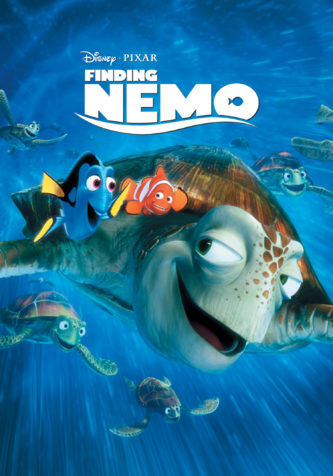 There are 3.7 trillion fish in the ocean.
They're looking for one.
Marlin: Now, what's the one thing we have to remember about the ocean?
Nemo: It's not safe.
Marlin: That's my boy.
Advertisement:

Finding Nemo is a 2003 computer-animated film from Pixar and the first one from the company to win the Oscar for Best Animated Feature.

The movie takes place in and around the Great Barrier Reef near Australia, and centers on a neurotic clownfish named Marlin (Albert Brooks). After losing his mate and all but one of their 400+ eggs in a barracuda attack, Marlin becomes overprotective of his remaining son, Nemo. On his first day of school, Nemo gets fed up with Marlin's fear of the ocean, and ends up disobeying his father's orders by going near a boat. Soon after, Nemo gets "rescued" by a scuba diver, and Marlin, going against all his fears, goes off to find him. Marlin joins up with a forgetful blue tang named Dory (Ellen DeGeneres), and they brave all sorts of obstacles to, well, find Nemo.

Meanwhile, the scuba diver turns out to be a Sydney dentist who puts Nemo in his office's aquarium, and plans to give the fish to his niece, Darla, for her upcoming birthday. The other fish in the tank, most of whom are somewhat insane, decide to help Nemo escape (especially because Darla is described as a "fish killer", who, whenever she gets a fish, shakes their plastic bag too hard).

A sequel, titled Finding Dory, was released on June 17, 2016. There also exists a Licensed Game that released around the same time as the film with the same name.

Not to be confused with the comic strip Little Nemo.

Dory and Marlin Get Stung

Dory and Marlin pass out after being stung by jellyfish.

Example of:
Electricity Knocks You Out

Dory and Marlin Get Stung

Dory and Marlin pass out after being stung by jellyfish.