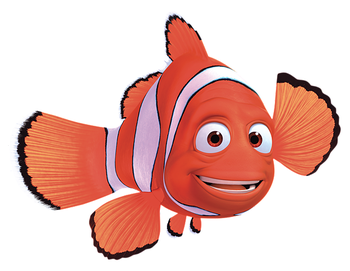 A clownfish who becomes an overprotective father after his mate Coral and all but one of his offspring were killed by a barracuda, making him very protective of Nemo to the point of isolating him. After Nemo is taken by divers, Marlin risks life and fin to find and rescue his son, becoming a braver and more self-confident person himself. He is the main protagonist of Finding Nemo and the male protagonist of Finding Dory. 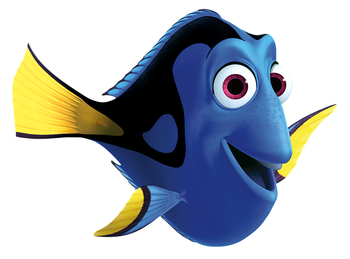 A Pacific blue regal tang with short term memory loss, Dory becomes Marlin's companion during his search for Nemo. Ditzy and absent-minded, but optimistic and honest, Dory provides much moral support and comfort that Marlin has been missing for years. She becomes the protagonist of Finding Dory.

Marlin's son. The sole survivor of a barracuda attack, Nemo grows up with a "lucky fin" that did not develop properly. He is very curious and brave, but sheltered. His father's overprotectiveness has kept him from attending school and having adventures. He is captured by divers and placed in a dentist's fish tank, earning the nickname "Sharkbait" for aiding in their escape. In the second movie, he moves from protagonist to Marlin's rather funny moral support. 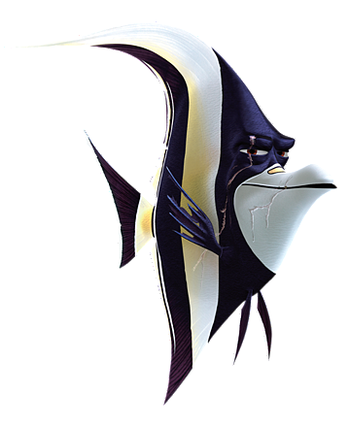 A Moorish idol and the leader of the Tank Gang. 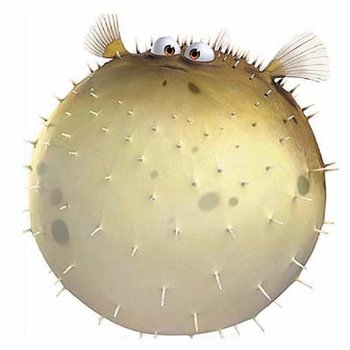 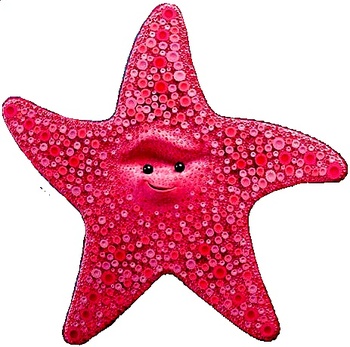 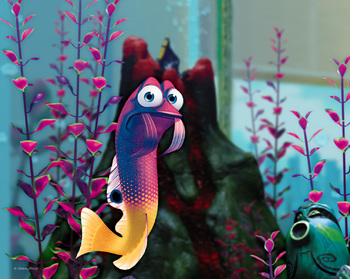 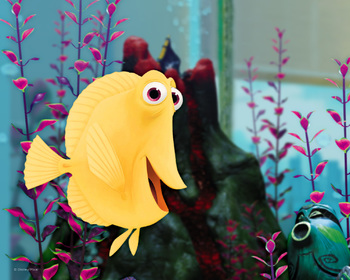 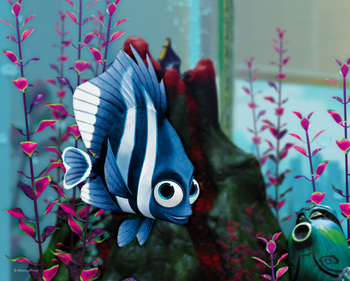 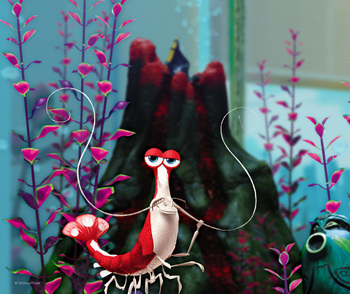 A Pacific cleaner shrimp who speaks French. We're not sure where he came from either. 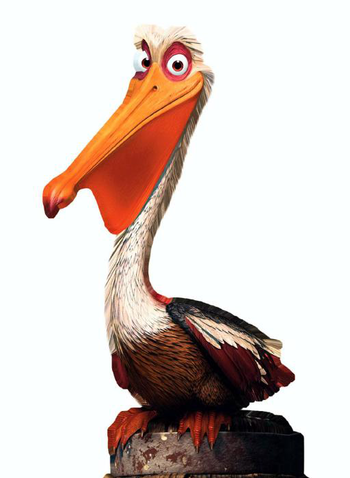 An Australian pelican. Technically not part of the Tank Gang but still frequently hangs out with them, mostly to watch the dentist's patients. 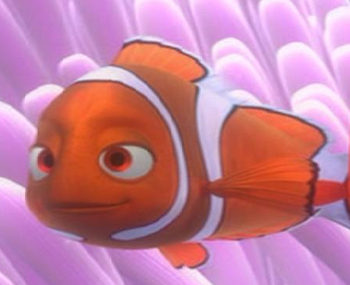 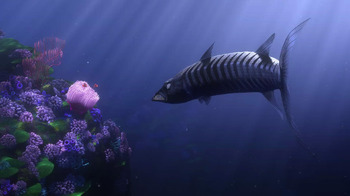 A great barracuda responsible for killing Coral along with her and Marlin's other children.

Nemo's friends and classmates. A flapjack octopus, a seahorse and a yellow longnose butterflyfish respectively. 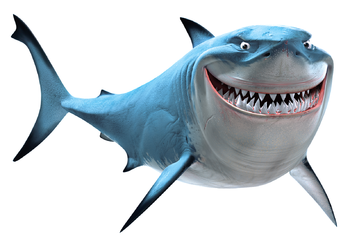 A great white shark who wants to quit his habit of eating fish. 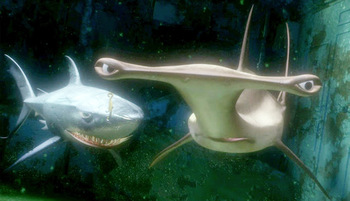 A small green fish that Anchor brings to the meeting as his "fish friend". 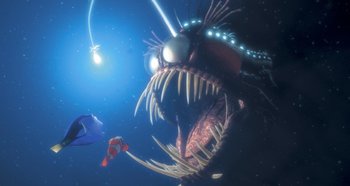 An anglerfish Marlin and Dory run into after following the diver's mask into a pitch-black trench.

The School of Moonfish 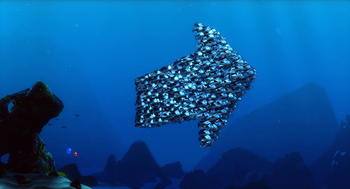 A school of moonfish who give Marlin and Dory directions to Sydney. They also enjoy doing impressions. 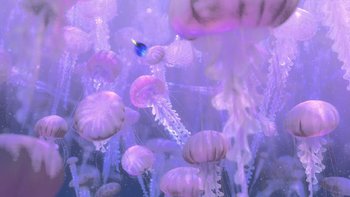 A bloom of jellyfish who harass Dory and Marlin after they attack a baby one. 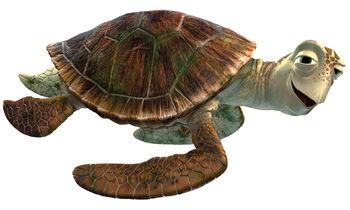 A green sea turtle who helps Marlin and Dory find their way to Sydney. 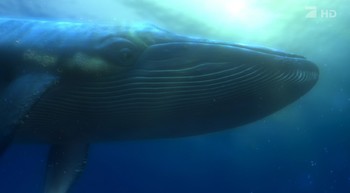 A blue whale encountered by Martin and Dory. 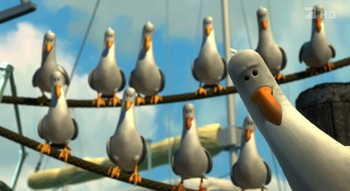 A flock of seagulls who are minor antagonists, only caring for food. They are rather stupid and only say "Mine!"

A bioluminescent squid who is a minor antagonist in Finding Dory, as well as the sole new character in who isn't a part of the Marine Life Institute.

The dentist who "rescues" Nemo from the reef and puts him in his fish tank, thus setting up the main plot of the film. 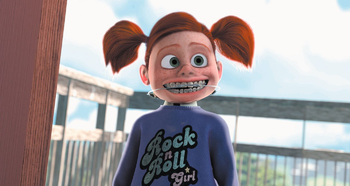 Dr. Sherman's niece, but known to the Tank Gang as "the fish killer." 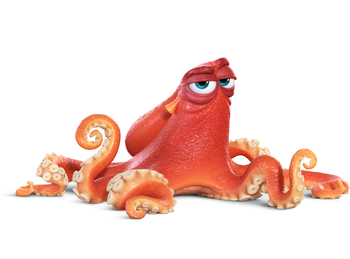 A grouchy octopus who's determined to bust out of the institute. 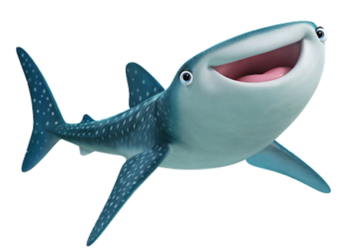 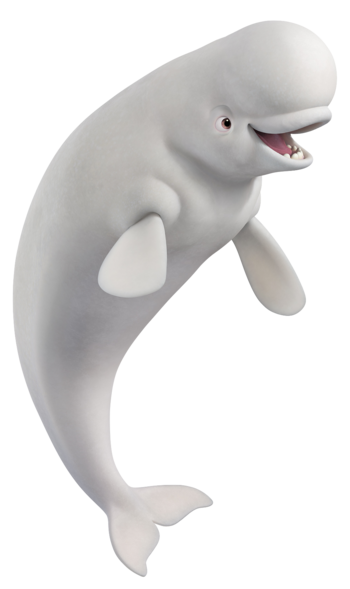 A beluga whale who lives in the tank next to Destiny. He has an unknown injury that causes his echolocation to not function properly. 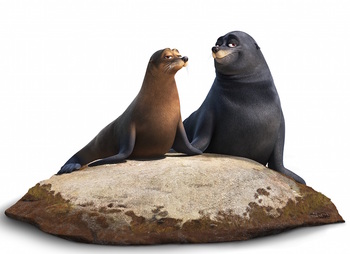 Two sea lions that hang around the shore close to the Institute. 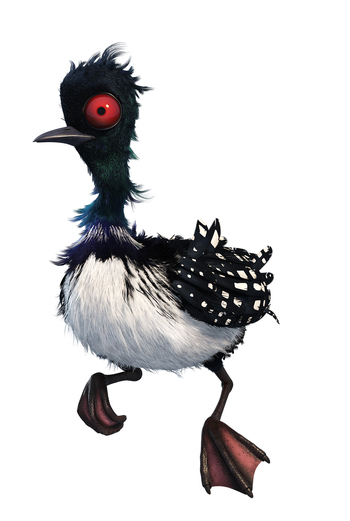 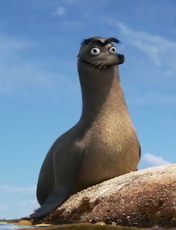 A sea lion that is always trying to get on the rock that Fluke and Rudder are on.

Jenny and Charlie
Voiced by: Diane Keaton and Eugene Levy 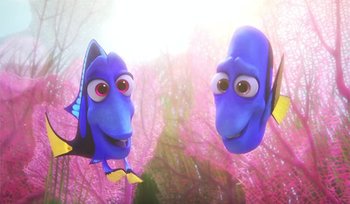