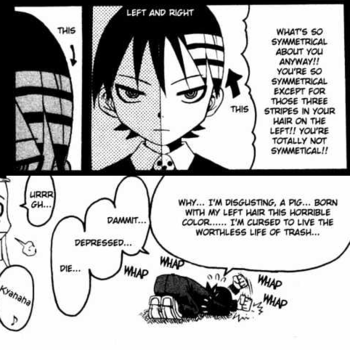 This happens everytime. He'll get over it.
Advertisement:

These characters tend to be pretty upbeat most of the time they appear onscreen. While they may get angry on occasion, they still remain active. That is until you find the very thing that hits them in the feelings the hardest.

Whether it's a word, an action, or anything else, these characters will fall apart when this button of theirs is pushed. Effects of pushing this button include but are not limited to crying, moping, loss of focus on their task, going into a corner to pout, etc.

These characters may even trigger their own button unintentionally. Whenever the button is pushed, it often takes the effort of other characters to get them moving again. Alternatively, they may get over it after a certain amount of time, but they will still collapse in sadness if the switch is pushed again even if they got over it seconds earlier.

If everything makes the character sad, then they are more than likely to be The Eeyore. Compare Trauma Button, when the trigger is past trauma. Compare to Brown Note, where something can induce sorrow just from exposure. Compare Emotion Bomb, which inflicts sadness on anybody. Compare and contrast Berserk Button which is an action that sends a character into a state of rage when pushed. See also Made Myself Sad for self-inflicted versions.

Lack of symmetry angers Death the kid, but pointing out that he himself is not symmetrical causes him to collapse in depression.

Lack of symmetry angers Death the kid, but pointing out that he himself is not symmetrical causes him to collapse in depression.