My Instincts Are Showing 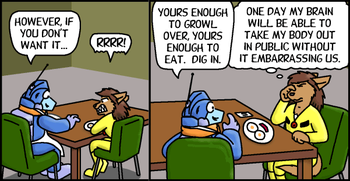 But today shall not be that day.
"Covered with towels? Ack! My instincts are showing. I just buried a Tupperware bowl."
— Florence Ambrose

A non-human character tries to live amongst humans. Or maybe a human character is made half-non-human. He does a good job of hiding his non-humanness, but occasionally his species's normal (and non-human) behavior comes out.

Whatever the reason for a transformation may be, this is almost guaranteed to happen during or after shapeshifting. This may include food preferences unusual for their current form or other stereotypical behavior.

Humans are not completely exempt, no matter how much we'd like to think otherwise, though these occasions are often solely limited to life-or-death situations where the pressure regresses the mental state to a fight-or-flight mindset; focus on surviving, and survive at any cost.