Fanfic / Linked in Life and Love 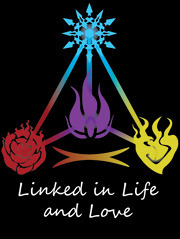 Linked in Life and Love

is a RWBY fanfic written by | OmegaInfinity |

, who also authored the Storm Hawks fic The Strength in Weakness.

In an AU where Faunus go into heat once a month, which they usually control via pharmaceuticals, Blake finds herself without her medication and the school on lockdown. Trapped with her teammates she is determined to ride it out through sheer willpower, but finds to her surprise that her teammates are willing to help her in her hour of need, even if it is awkward as all hell. In the aftermath, they find that maybe their feelings for each other are more than they ever suspected.

A Pollination fic without Enabler, Linked in Life and Love focuses mainly on the relationship between all four girls of team RWBY and them getting used to each other's extended family, all the while moving towards an earlier than canon conflict with Adam Taurus who's not too happy about his ex-girlfriend sleeping with the enemy.

Linked in Life and Love contains examples of: