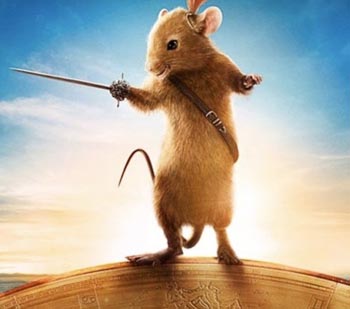 "I cannot imagine mice as the embodiment of evil. Mice are such charming little creatures, and it is not by accident that Mickey Mouse became an absolutely universal hero."
— Andrey Konchalovskiy on why he changed the Mouse King to the Rat King in his adaptation of The Nutcracker
Advertisement:

Unlike rats, mice are often portrayed as nice and heroic even though they are common household pests.

Very small and cute, yet wild, the mouse is an animal often used as a metaphor for someone easily underestimated. Thus, mouse characters and humanoid mouse races tend to be heroic and really good people, yet easily underestimated. In many works, this last trait is something they grow to resent deeply; it's hard to demand respect from someone when you can't even reach his knees and your voice is very squeaky — no matter how brave you are.

These mice characters are designed to be likable one way or another. Some are heroic, some are nice, and some are both. A potential Pest Controller, and a perfect animal to stun a Cruel Elephant.

Fictional mice of this sort will typically be white, tan or light gray, and are also often drawn with deliberately cute, chubby or fluffy designs, generally tending towards large eyes and short, round snouts, something particularly apparent when mice appear in the same works as rats.

Resourceful Rodent for rodents portrayed as clever and resourceful, You Dirty Rat! for rats who are portrayed as disgusting, often as the Unpleasant Animal Counterpart to mice. If construed in the knee-jerk manner by often-larger life forms as not so nice, it's Eek, a Mouse!! Compare Screwball Squirrel, the squirrel equivalents who are hyperactive pranksters and/or CloudCuckoolanders (although there are just as many outright villainous examples). See also Righteous Rabbit for the lagomorph end of the spectrum, and Cute Kitten and Precious Puppy, the feline and canine equivalents respectively.

Here we see some of the mice of Redwall. Matthias, the protagonist, is headstrong, but courageous and well-meaning. We see him interact with Abbott Mordalfus ("Brother Alf") and Abbott Mortimer, who are a bit strict but still care for the young mouse.

Here we see some of the mice of Redwall. Matthias, the protagonist, is headstrong, but courageous and well-meaning. We see him interact with Abbott Mordalfus ("Brother Alf") and Abbott Mortimer, who are a bit strict but still care for the young mouse.