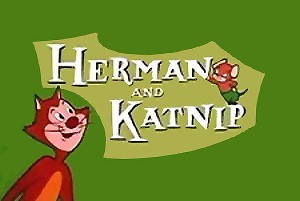 If imitation, as they say, is the Sincerest Form of Flattery, then Famous Studios' Herman and Katnip certainly flattered MGM's Tom and Jerry. Given that any mouse and cat cartoon is going to have some similarities with any other cat and mouse cartoon, the resemblances of the characters is still quite striking.

Herman the mouse in particular bears a strong resemblance to Jerry the mouse. Katnip the cat did not look quite so much like Tom the cat, but you would be forgiven if you thought you knew where the inspiration for the cartoon character came from.

Herman and Katnip did diverge from Tom and Jerry in two respects. The characters spoke: Katnip in a dopey Simpleton Voice, Herman in a Brooklyn twang. The standard episode setup was different, too: Herman's cousins Reuben, Dubin, and Louie (and other, unnamed mice) would be having fun at some activity; Katnip would arrive to persecute them; then Herman would arrive (often coming "from the city") to defend them.

Herman and Katnip are not remembered like MGM's cat-and-mouse pair; not only, perhaps, because they appeared on cinema screens later than their more famous rivals, but also because the personalities of the pair were possibly not quite as engaging. Also, the Famous Studios' cat-and-mouse series did not receive as many later television airings as Tom and Jerry enjoyed.

If Herman and Katnip lacked anything in personality, they tried to make up for it with action. For "action" read blowing Katnip up; sending Katnip off a cliff; squashing Katnip with a 100-ton weight, and so on. With so much emphasis placed on violence—almost all of it delivered to the cat—it's no surprise that Mike Reiss, a writer on The Simpsons, confirmed that Herman and Katnip, not Tom and Jerry, were the real inspiration for Itchy and Scratchy.

Both Herman and Katnip also had several solo cartoons, where one would appear without the other. Before being paired up with Katnip, Herman had a few cartoons where he either appeared solo, or co-starred with Henry the Rooster, a Henpecked Husband who'd team up with Herman because his tyrannical wife Bertha was terrified of mice. Katnip on his side had a number of cartoons where he went up against Buzzy Crow. In these shorts, Katnip would have an ailment or a problem, and read in a book that it would be cured with crow meat. Buzzy would talk his way out of getting killed and used as a cure by claiming he was an expert on this particular ailment, and spend most of the cartoon subjecting Katnip to "alternative" cures — most of which involved a generous dose of pain and torment.

When the series ended, it wasn't so much because the cartoons ran out of steam, as because the studio sold all its ongoing characters to Harvey Comics, which had licensed them for several years. But Herman and Katnip didn't go on to very great success at Harvey. They appeared in the back pages of a lot of comics during the 1950s and early 1960s, and were featured in an occasional issue of Harvey Hits (a later Harvey title with rotating stars), but never had their own comic book. When other Harvey characters were re-adapted into animated form—even some who, like Richie Rich and Wendy the Good Little Witch, had never been animated before—Herman & Katnip weren't. note  though their segment were added to the "Casper the friendly ghost" cartoon, along with segments with Baby Huey and Little Audrey. Eventually, they faded from view, and are now scarcely remembered.

With that said, in October 2011, a complete DVD set of all their adventures was releasednote Albeit in their 90's broadcast form. Universal Studios, through Harvey Comics parent DreamWorks Animation, now owns the rights to the characters and all shorts in the series, but so far there are no plans for any sort of revival.

Herman and Katnip, Herman and Henry and Buzzy and Katnip provides examples of the following tropes: